Dietrich Bonhoeffer, born February 4, 1906, Breslau, Germany. Flossenburg, Germany. A German Protestant theologian important for his support of ecumenism and his view of Christianity’s role in a secular world. His involvement in a plot to overthrow Adolf Hitler led to his imprisonment and execution. His Letters and Papers from Prison, published posthumously in 1951, is perhaps the most profound document of his convictions.

Bonhoeffer grew up amid the academic circles of the University of Berlin, where his father, Karl Bonhoeffer, was a professor of psychiatry and neurology. Later, Dietrich Bonhoeffer studied theology at the universities of Tubingen and Berlin and was influenced by the historical theologians Adolf von Harnack, Reinhold Seeberg, and Karl Holl but also was strongly attracted to the new “theology of revelation” propounded elsewhere by Karl Barth.

Starting in 1933, Bonhoeffer was involved in protests against the Nazi regime, especially its anti-Semitism, during which he served as pastor of two small German congregations in London, where Bonhoeffer became a leading spokesman for the Confessing Church, the centre of German Protestant resistance to the Nazi regime. Bonhoeffer was fierce in his defense of a nonracial definition of Jews. In 1935 Bonhoeffer was appointed to organize and head a new seminary for the Confessing Church at Finkenwalde,where he introduced the practices of prayer, private confession, and common discipline.

In 1943, Bonhoeffer was arrested and eventually imprisoned. His fiancée Maria von Wedemeyer, the granddaughter of his close friend Ruth von Kleist Retzow would visit and provide food and news from the outside. For a year and a half, Bonhoeffer was imprisoned at Tegel military prison awaiting trial. There he continued his work in religious outreach among his fellow prisoners and guards. Sympathetic guards helped smuggle his letters out of prison to Eberhard Bethge and others, and these uncensored letters were posthumously published in “Letters and Papers from Prison”. After the failure of the 20 July Plot on Hitler’s life in 1944 and the discovery of secret Abwehr documents relating to the conspiracy, Hitler ordered that the Abwehr conspirators be destroyed. Bonhoeffer was condemned to death in 1945 by SS judge Otto Thorbeck at a court-martial without witnesses in Flossenburg concentration camp. He was executed there by hanging at dawn on 9 April 1945, just two weeks before soldiers from the United States liberated the camp, three weeks before the Soviet capture of Berlin and a month before the surrender of Nazi Germany.

The Benefit of Buying a Spettmann Bonhoeffer Window Awning

Bonhoeffer, has the ability to operate manually or just relax and control your window awning using a remote control. It can be operated using your smart phone thru our Smart-Shade app. This product has a great economical cost. 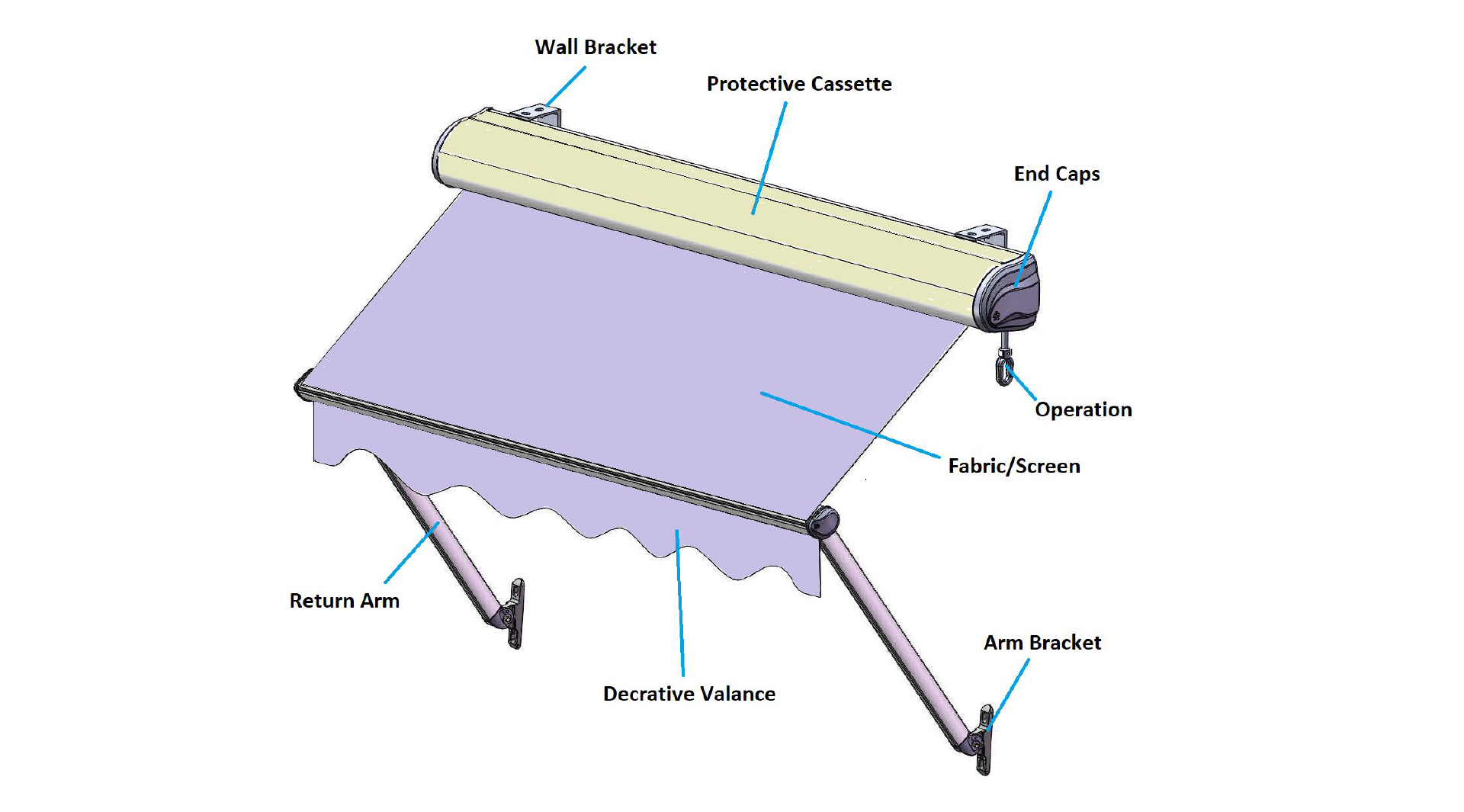 Protecting the fabric is very important for long lasting shade. We offer a semi-cassette housing to protect and extend the life of the product.

If using a mesh screen or fabric, they will provide provides comfortable shade and protection UV rays and glare. The fabric Spettmann offers are made of fade and weather resistant material. The mesh screen does will allow greater ventilation.

Our window awnings can be equipped with a decorative valance.

Our window awning uses spring-loaded arms made of high-quality aluminum.

Our arm systems have a wall bracket designed specifically for the type of guide system you desire, including a locking pin for easier installation. Made from die-cast aluminum and powder coated for protection.

All our Drop Shade component parts are protected with the highest quality of powder coating that will provide years of enjoyment.

The front bar is made of extruded aluminum tubing and powder coated for protection and includes a track for attaching a front valance. 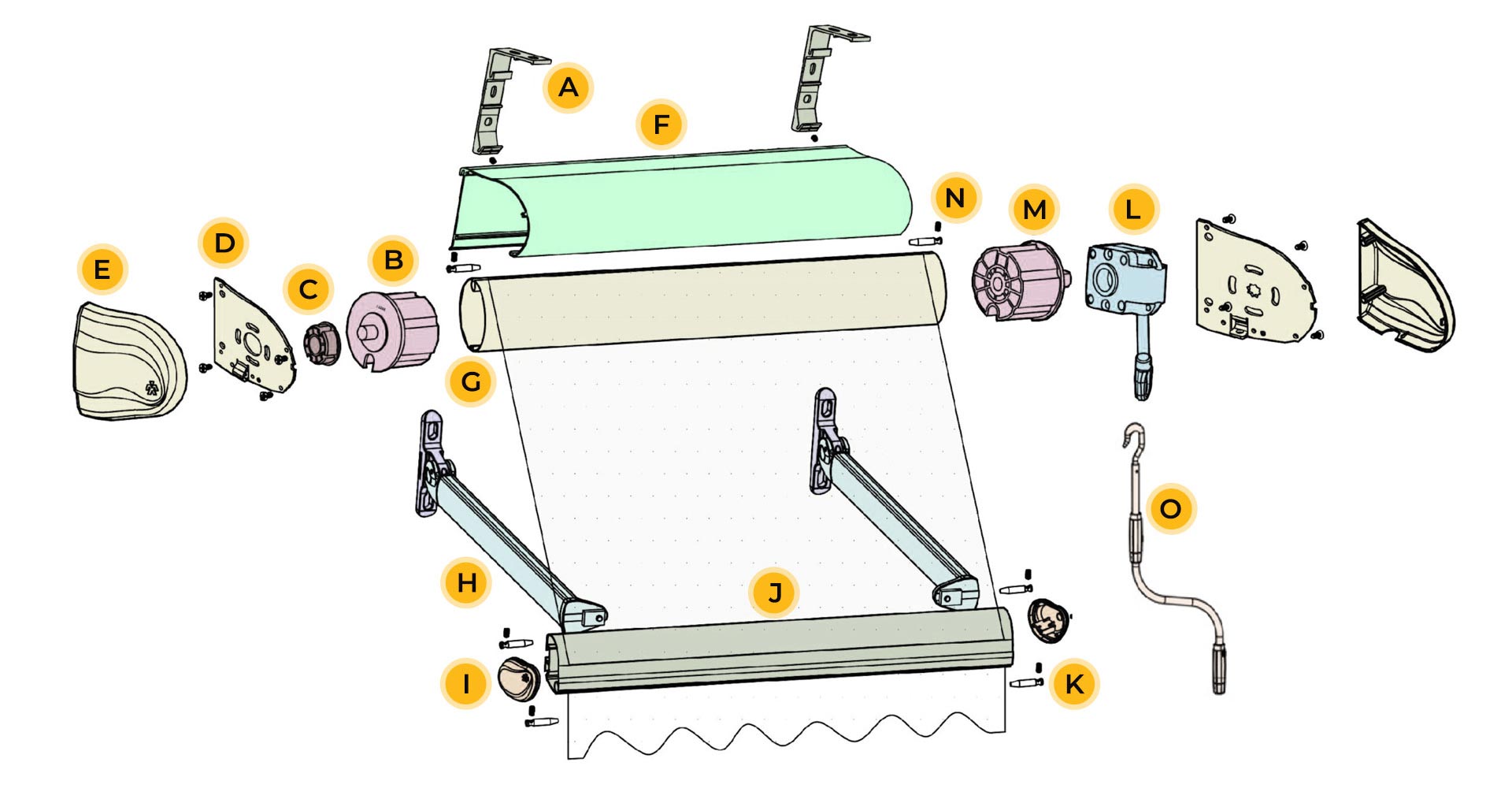 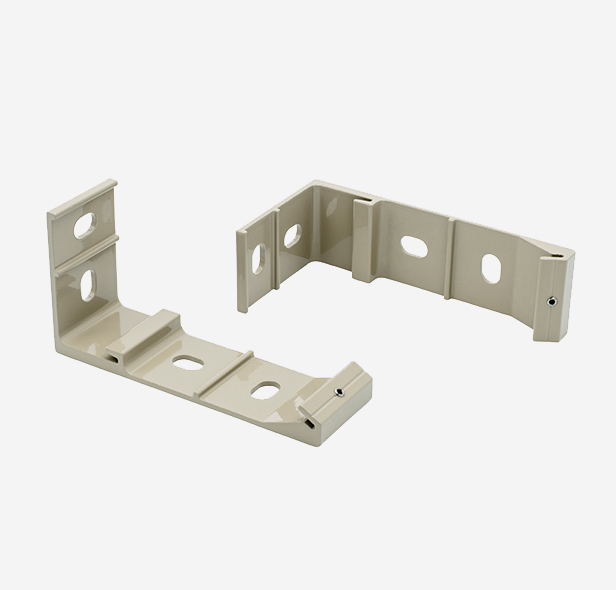 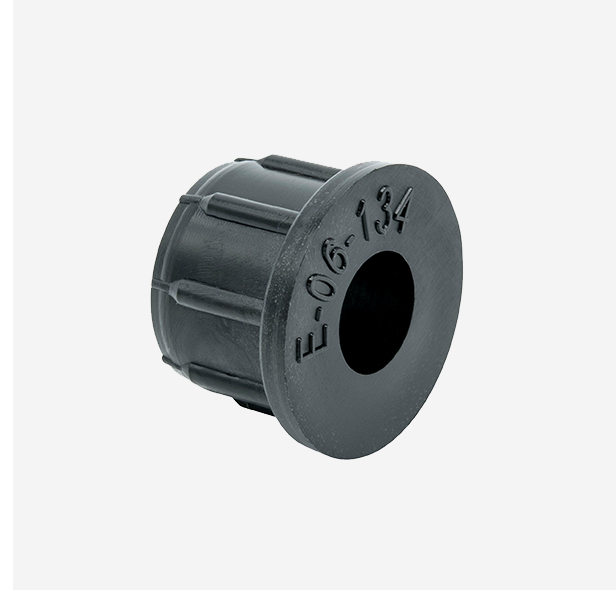 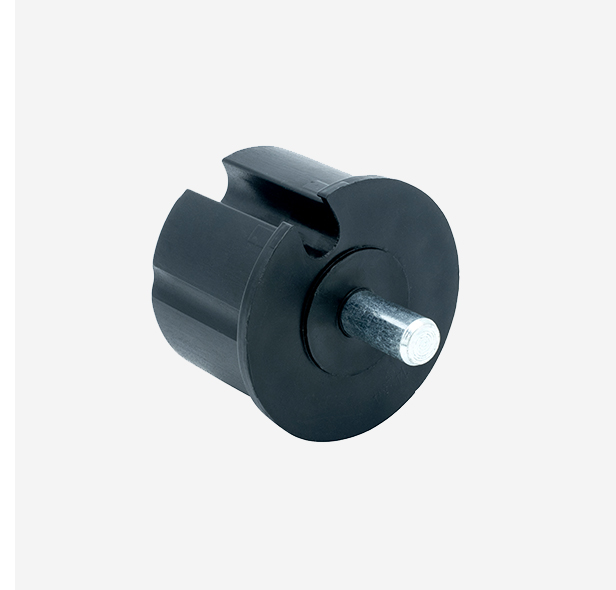 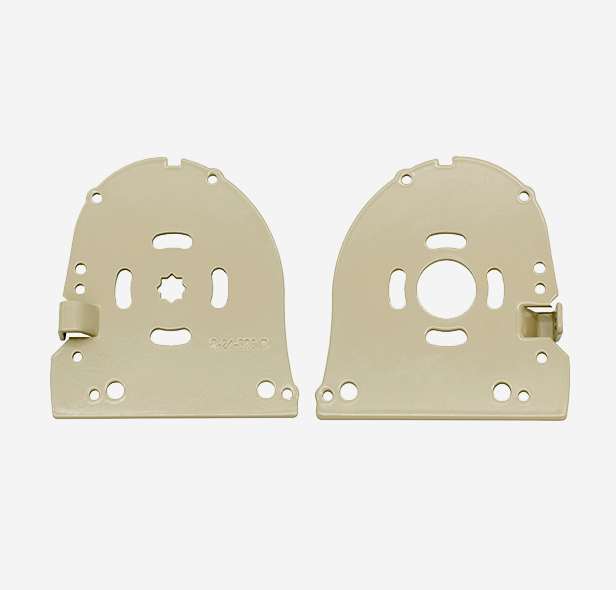 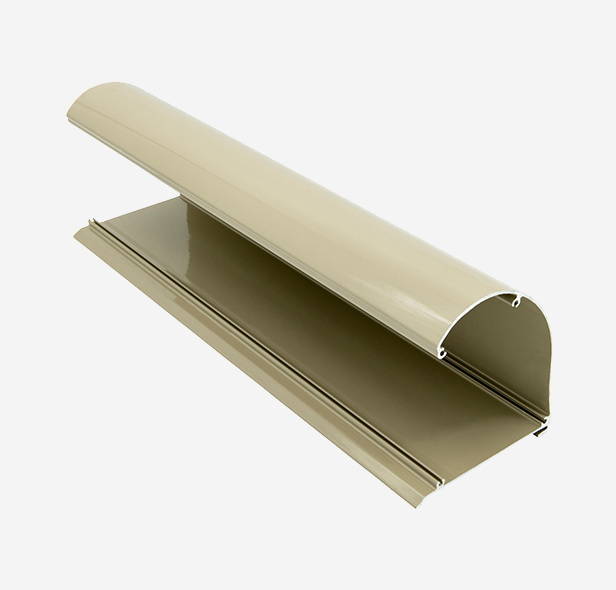 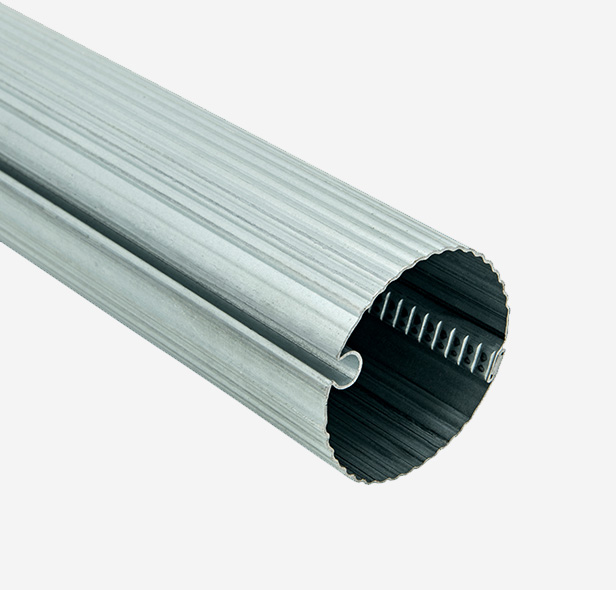 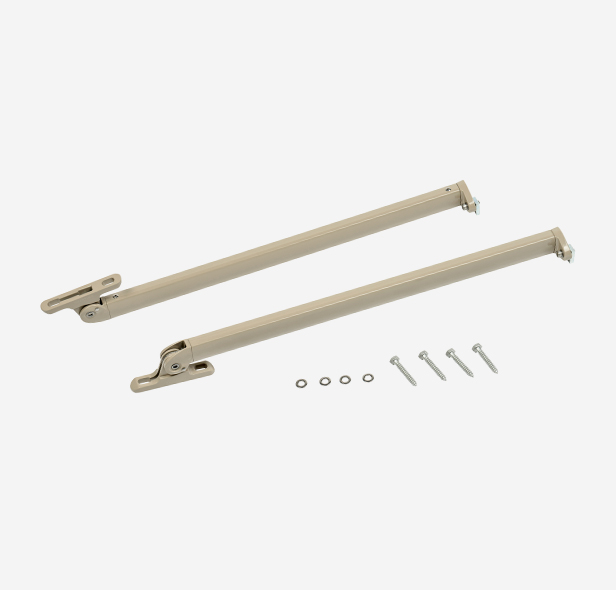 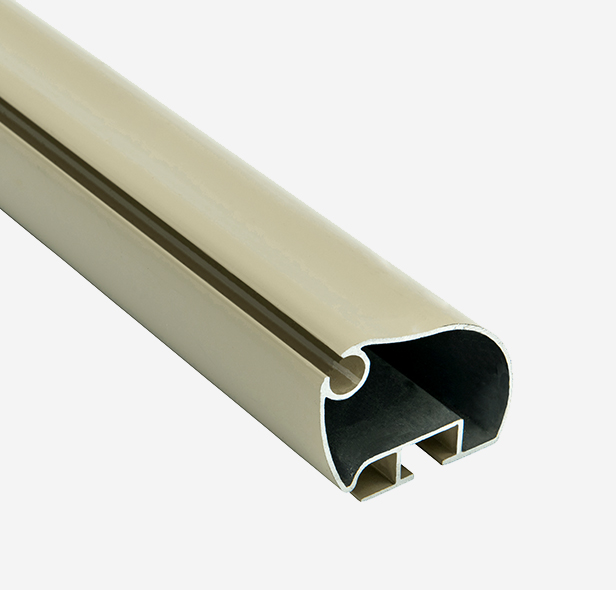 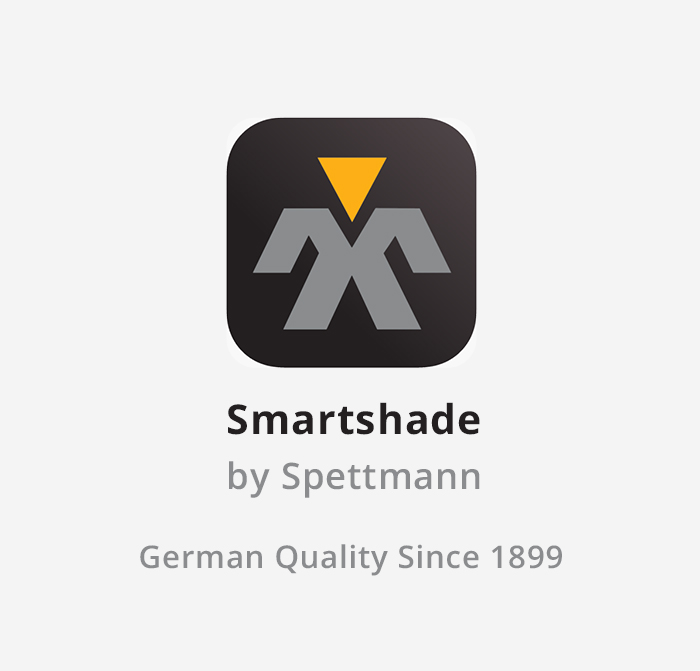